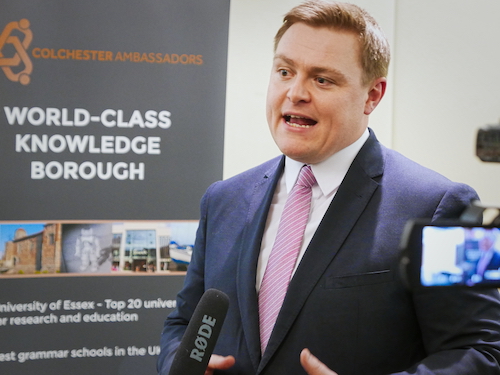 The Colchester Ambassadors launch event at Westminster, hosted by local MP Will Quince, attracted a Secretary of State, a Government Minister  and a number of MPs, keen to hear more about what the town has to offer.

The event, on January 29th 2018, was also attended by 150 business people and inward investors, who were introduced to the wide investment opportunities being offered by one of the fastest growing towns in the country.

Speaking at the event, the Secretary of State for Housing, Communities and Local Government Sajid Javid MP, said he had visited Colchester on a number of occasions and was impressed by how successful the town’s businesses are.

The Rt Hon Anne Milton MP, who is the Minister of State for Skills and Apprenticeships and Minister for Women, also praised the Colchester Ambassadors for their initiative and energy, and said they were raising the bar by showing collective effort.

Speaking at the launch, which was also attended by local MPs Bernard Jenkin and Priti Patel, Will Quince MP said: “We want to show everyone the golden opportunity that Colchester presents to investors, re-locating businesses and existing organisations within our town.

“The best people to do this are not politicians like me, but those who really know what they’re talking about – business leaders that have successfully built their companies in our town. That is what Colchester Ambassadors is about.

“The Ambassadors are a group of senior business people from Colchester who wish to promote the significant opportunities and uniqueness in Colchester. They have a passion for our town shared by all of us in Colchester – it is up to us now to get behind them and make this vision a reality.”